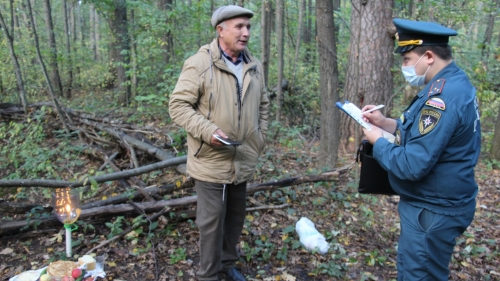 The attention that self-proclaimed Shaman Gabyshev has received for his plans to march on Moscow and the victory of the KPRF over United Russia in Mari El, one of the strongholds of traditional religion in the Russian Federation, have sparked concerns in the Russian capital that paganism is energizing the political opposition.

Such concerns are likely overblown, Andrey Melnikov, editor of NG-Religii, says. But those who follow paganism in Russia and recent developments in Mari El suggest that they are not without foundation, largely the product of official inattention and thoughtless repression.

The situation in Mari El is especially fraught, Melnikov suggests. On the one hand, the republic government is actively supporting the pagans in their hope to add their traditional religion as part of the religious portion of the school curricula there. Including it in the cultural component is one thing but including in the religious one is another.

That challenges Moscow’s policy of allowing only the four traditional religions as it defines them – Orthodox Christianity, Islam, Judaism and Buddhism – to offer courses. In the case of Mari El, demands for paganism to be included is thus a challenge to that system and especially to Russian Orthodoxy, the chief alternative faith in that Finno-Ugric republic.

On the other hand, the decision of the authorities to bring charges against a leader of the pagans in Mari El, Vitaly Tanakov, for setting fire to a woods during a religious ceremony, has sparked real concerns about the links between paganism and the political opposition to the Kremlin and the ruling United Russia party.

Tanakov and his supporters are convinced that the charges were brought against him not because of the fires or the religious ceremony that sparked them but rather because he and some of those who took part made statements about how things should not be allowed to go in the direction of the restoration of Stalinism and repression.

The authorities may have wanted to send a message that such statements are not permissible, especially at a time when the Kremlin is celebrating Stalin and when the question of repressions is being asked during the election campaign. But by going after the pagan leader, they have opened a Pandora’s box of problems.

Paganism almost by definition is separate from the state rather than being directly opposed to it. But the failure of the powers that be in Moscow to understand the nature of this traditional faith in Russia threatens to link the pagans to the political opposition, something that could add the emotional power of the former to the latter.

Roman Shizhensky, a specialist on traditional faiths at the Baltic Federal University, sees a real risk. “The powers for too long ‘have not taken notice’ of so-called traditional religiosity in all its multiplicity of manifestations. In a certain sense, the paganism of the indigenous peoples of the Russian Federation is inclined from the outset to be oppositionist politically.”

One need only remember, he says, state policies seeking to promote “’a standardization’ of world views” among the Maris and others in tsarist and Soviet Russia, an impulse that all too often continues to this day. So far, opposition attitudes among the various pagan faiths have not linked up, but they may do so if the powers that be continue to act like bulls in a china shop.

“Ignoring or total suppression of such religious requirements of contemporary pagans,” Shizhensky says, “is only multiplying the number of ‘cases,’ especially in areas with historically established and developed national religious discourses.” Failure to take these seriously will work against the regime politically as well as culturally.