Malady Front (Young Front), Belarus’ Czech-registered opposition youth group, has called on the United States and Europe to recognize the independence of Russia’s regions of Chechnya, Dagestan, and Ingushetia.

Malady Front In its statement issued on August 27, Malady Front condemns what it calls Russia’s imperial ambitions and “violent and armed invasion” of South Ossetia and Abkhazia, which the organization says are part of sovereign Georgia. END_OF_DOCUMENT_TOKEN_TO_BE_REPLACED

Nikolay Almanov was born in the village of Zapolnye Pertnury in the Hill-Mari district of the Republic of Mari El in 1953.

After high school, Almanov entered the Kozmodemyansk Art School. In 1984, he graduated from the Yoshkar-Ola Art College. END_OF_DOCUMENT_TOKEN_TO_BE_REPLACED

Academic from Helsinki feels right at home in northernmost Lapland 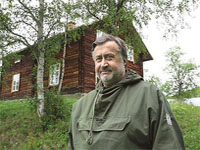 Pekka Sammallahti is researching the Sámi language and lives in Utsjoki, where one hears Sámi everywhere
A narrow winding forest road diverges from the main road between Utsjoki and Nuorgam, the northernmost village in Finland. END_OF_DOCUMENT_TOKEN_TO_BE_REPLACED 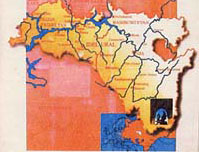 Moscow’s increasingly harsh assimilatory policies, welcomed by many ethnic Russians as a defense of their dominance, not only are angering members of non-Russian groups but leading various minority groups to cooperate in new ways, a development that has the potential to become a nightmare for the central authorities. END_OF_DOCUMENT_TOKEN_TO_BE_REPLACED