Status of Mari-speaking Citizens of the Russian Federation

Dear Friends and compatriots! In the context of preparations for the IX All-Mari Congress which will be held in 2012, we would like to draw your attention to the draft of a joint report on the status of Mari-speaking citizens of the Russian Federation. Please leave your comments and suggestions for additions in the comments. The document will be issued in late 2011 and submitted to the president, the government and the Federal Assembly. An English version of the report will be sent to the European Union, so that it can be taken into account as regards its relationship with Russia. 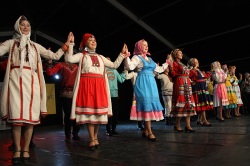 From 29 June to 3 July, the folklore festival “Jutajaiset” is taking place in the Finnish city of Rouvaniemi. Among the participants at this festival is the Mari folklore ensemble “Mariy Pamash” from Yoshkar-Ola. Displayed are pictures from the festival’s website taken by Veikko Stöckel on the first two days of the festival. END_OF_DOCUMENT_TOKEN_TO_BE_REPLACED