Is there still multilingualism in the Middle Volga region today? 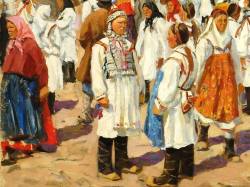 The structural similarities of the Middle Volga languages, sometimes referred to as the Volga Sprachbund, would not have been possible without a significant amount of multilingualism. In contact zones, multilingualism was normal.

Moreover, following the conquest of Kazan in 1552, Tatar remained the lingua franca of the Middle Volga. For example, if a Mari met an Udmurt, they would have likely spoken Tatar to each other. Other than in western regions (among Mordvins, Chuvash and Hill Maris), Russian linguistic influence was minimal. In many regions, Tatar remained the lingua franca into the Soviet period, even after Stalin decreed that Russian was to be the language of inter-national communication in the 1930s.

Could multilingualism survive the oppressive years of communism? Field research by the Estonian linguist Paul Ariste in the 1960s confirmed that multilingualism was still alive and well in the Middle Volga region. In the Mari-Turek and Paranga districts of Mari El, and also in the Malmyzh in Kirov province, there was Mari-Russian-Udmurt trilingualism. Mari-Russian-Chuvash trilingualism existed among the Mountain Maris in areas bordering the Chuvash Republic. Ariste even found villages in Mari-Turek where four languages were spoken – Mari, Udmurt, Russian and Tatar. Ariste found that multilingualism did not only belong to the older generations, but also the younger generation.

According to Sirkka Saarinen, there are still villages in Bashkortostan and Tatarstan where Maris and Tatars live side-by-side and are completely bilingual. If these findings are true, it would be safe to say that the level of passive knowledge of Volga languages is quite high. Multilingualism in the Middle Volga region is far from dead. In urban centers, however, where Russian language and culture dominates, it is a completely different story.

9 responses to “Is there still multilingualism in the Middle Volga region today?”